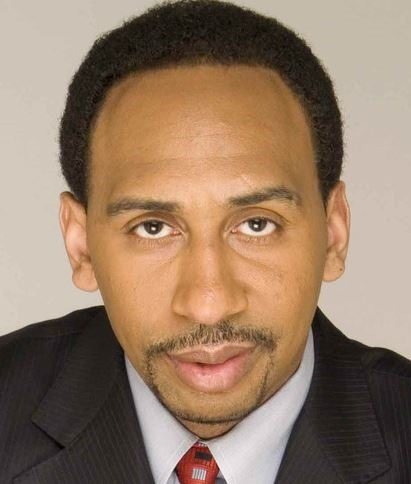 Stephen A. Smith: Ebony and Irony

It’s kind of a difficult to criticize someone’s journalistic integrity when you’re not exactly a journalist yourself, but I’m giving it a shot. News media has shifted away from actual news, and merged into a stream of opinion pieces where analysts spend 99% of the time discussing how they feel about an issue and 1% of the time reviewing facts. It’s the key to the ratings machine – overly opinionated pendants provoke the masses, and the masses respond by providing the network with further viewership. And the world keeps spinning.

The world of sports broadcast isn’t exempt from this at all. Frankly, as an avid sports fan, I can admit that I understand the reasoning behind it. It can be difficult to discuss the same sport, day after day, trying to come up with new material in a season that lasts 1/3 of the year. Networks do their best to spice things up, so I figure that a majority of these people only half-believe the stuff flying out of their mouths.

Some pundits focus on issues they’re comfortable with, and Colin Cowherd is a perfect example of this. He’s one of my favorite sports personalities out there. He continuously focuses on stats to make his case (even the stats that no one honestly cares about), and that’s his shtick. However, I can still recognize that one of my favorites still has his flaws. He’ll remind you that he loves Lebron, hates Iowa Football and thinks Russell Westbrook is overrated almost every day. While guys like Colin keep their controversial opinions relatively harmless, others swing for the fences. Those broadcasters will say almost anything they can to boost their ratings, and many of their opinions are devoid of any sort of validity.

The broadcasters on ESPN’s First Take are part of this class. It started with Skip Bayless and Stephen A. Smith. Skip moved over to a less popular show on Fox to work with Shannon Sharpe, who’s essentially a less talented/literate version of Stephen A. If you’re thinking about tuning into Undisputed anytime soon, run headfirst through the nearest wall to evoke a similar response. Max Kellerman stepped up to the plate as Skip’s replacement, and I couldn’t be more disappointed. Kellerman used to be a host on the fun-loving show, Sports Nation, and I was a huge fan of his. Now, he’s just another sellout, tossing out hot takes with the highest paid clown in the industry.

But with all of this being said, I want to focus on the worst of the worst. I want to focus on Stephen A. Smith, because he’s not just everything that’s wrong with sports journalism. He’s everything that’s wrong with American Media. Stephen A. Smith spends his days on First Take spewing out outrageous hot takes by the gallon. I don’t know what’s worse: his lack of actual sports knowledge or his obvious overuse of a word he just pulled out of a dictionary each morning before a show. The guy is usually just an idiot that I write off, but his most recent actions are simply intolerable. It seems that Stephen A. recently became the self-proclaimed voice of the black community here in America. I say this because many of his opinions nearly always stem into the issue of race, to which his opinion (he thinks) reflects the mindset of the entire race. He uses these arguments time and time again, and denotes the opinions of others by asserting that people outside of the black community simply can’t relate.  It’s a cheap and easy race card he can pull in any debate.

Known to much of the sports world, Tony Romo just retired from the Dallas Cowboys. He began his career in Dallas and that’s exactly where he ended it. Some people loved Tony and others thought he was overrated, but everyone knew that Romo had a special connection with the fans and the City of Dallas as a whole. Trust me, I live in Dallas and hate the Cowboys. I know more about Romo than I know about myself now. The Dallas Mavericks honored Tony with a temporary signing last week. He got to shoot around with the team, hang out with everyone on the bench and everyone had a good time… or so I thought.

In a recent First Take segment, Max Kellerman and Stephen A. started to spout off on whether Tony Romo deserved to suit up with the team. Kellerman took a stance that Romo didn’t deserve to be honored in such a way due to his lack of success on the field. Most could care less about a symbolic signing in the first place, but I guess someone could make that point. Stephen A. decided to take it a little further than that, stating that when “folks in the black community huddle amongst ourselves” the subject “…irks us.” His point ultimately centered on the notion that black athletes wouldn’t receive such treatment, and that the mock-signing of Romo exemplified racial disparity here in america.

I have never heard something so insane in my life. Athletes who achieve their success in one city throughout their careers are always lauded by their fans. Hell, sometimes they can spend their careers in two cities, and both fan bases will love them equally. It’s like having 2 ex-wives, but both of them would still buy you dinner. But making it an issue of race? It’s something I didn’t even think was possible. Will Cain pushed back on the subject, noting that several black athletes have received high praise and recognition from their perspective cities, but one recent case comes to mind that should have entered the discussion. This athlete wasn’t just honored by his city. He was honored by several cities and went on an unprecedented farewell tour that lasted 82 games. This athlete is Kobe Bryant. No, he wasn’t given a mock-contract to play for the Rams for a day, but he was paraded throughout every arena during the Lakers’ tanking season. Sure, many great players receive farewell tours, but Kobe received a ceremony nearly even game. So, saying that black players are excluded from special treatment because of their skin color is completely off base.

Race is a troublesome issue in America, but using it to increase ratings is just pathetic. The more people trivialize the issue of race, the more it ultimately detracts from real issues regarding race. No one is arguing that people are treated differently because of their skin color. It’s sad that our country is still plagued by this issue. However, we cannot frivolously pull out the race card when issues of race aren’t present, because doing so will ultimately only contribute to a greater schism between races. It’s a move that only someone devoid of professionalism and talent would use. It’s a move that Stephen A. has pulled before and will continue pull time and time again. Until ESPN stops enabling him, the network will continue to be the circus to its clown.

Thank you, Stephen A.! You’ve officially made this sports fan hate watching his once favorite network.

‘You’re Not Black!’: Stephen A. Smith and Will Cain Clash Over Race in Heated Tony Romo Debate