“WannaCry” this time. Will it be “WannaDie” next?

A ransomware attack that began in Europe last Friday is lingering — and hitting new targets in Japan and China. The WannaCry software has locked thousands of computers in more than 150 countries. Users are confronted with a screen demanding a $300 payment to restore their files.

The cyberattack has hit more than 300,000 computers, White House homeland security adviser Tom Bossert said at Monday’s midday White House briefing.   Some cyber professionals are speculating that the North Koreans may be behind the attack due to similarities in the software code to prior attacks that were traced back to that country.

Imagine if a contagious disease were purposefully released in five or six major airports around the world, at the same time. Within days, it would be spread throughout the civilized world. 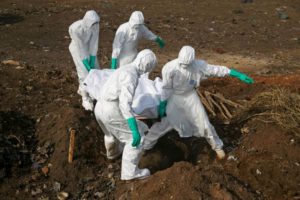 What happened last week should be a wake-up call to everyone. Just as no networked computer is 100% secure, no social human being is safe from a weaponized disease. As John Donne said, “No man is an island, entire of itself, every man is a piece of the continent, a part of the main ..”

I’ll call a bio weapon designed for use on a mass scale “Bloodware.”

You heard the term here first.  Let’s hope we never to have to hear that word again.