Taking a knee during the National Anthem is a hot button issue.

Conservative media pundits practically explode every time an NFL player does it, usually reverting to the notion that athletes should stay in their lane and just focus on the game. While I think that everyone has the right to express their personal opinion, it’s excessively hypocritical for a public figure to ask another to stick to their day job. Sorry, but athletes aren’t your average, every day American citizens and we’ve never treated them as such. 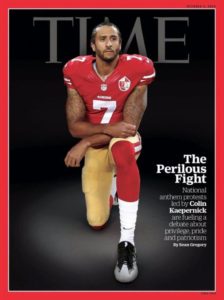 Athletes have always been larger than life. Society expects them to act as role models and exemplify traits that our children can look up to. In that sense, their presence in the public eye differentiates them from your typical American worker. This is what qualifies every professional athlete as a public figure. We’ve been known to hold these individuals to certain ethical standards and express that they should be involved in worldly issues, yet condemn them whenever they express a controversial opinion. This is a savage hypocrisy.

My issue isn’t that Americans are criticizing the opinions and subsequent actions of NFL players. If someone is going to throw out their opinion on a given topic, they should be ready to defend it. My issue is that Americans are opposed to NFL players having an opinion at all. It seems that Americans are okay with athletes serving society’s moral purpose, yet aren’t okay with them serving their own. Sorry, but life doesn’t work that way. Even worse are the conservative media pundits who criticize athletes for promoting liberal ideologies, saying that they aren’t in tune with reality, yet they’ll praise the athletes who project conservative values. If they don’t want one side expressing their political opinions, they shouldn’t be okay with their own doing so.

However, though they are a target for national criticism, it seems that NFL players might be the only people qualified to express their opinions at all. Whether or not you agree with Colin Kaepernick, or the other NFL players who knelt during the National Anthem, it seems that they were the only ones who promoted awareness through peaceful demonstration. Something that the members of the extreme left have been incapable of doing for the most part. Most recently, white players began to stand in solidarity with their black teammates. Derek Carr placed his arm around Khalil Mack during the National Anthem, and Justin Britt and Jeremy Lane stood next to a Michael Bennett as well. These NFL players seem to be the only people calling for peace and unity. On the other end of the spectrum, Ha Ha Clinton-Dix (a black NFL player) honored fallen police officers in Florida by writing the names of 4 fallen officers on his cleats. While the rest of us are squabbling in the streets, creating further racial division amongst people in this country, NFL athletes are acting like the role models we want them to be.

Maybe we can learn something from them.

Daenerys Targaryen of Game of Thrones

Oh, little one.  How innocent you are!

“Bending the knee” is a formal act of submission to a king, queen or lord, a recognition of authority and a demonstration of fealty. It is common for surrendering parties to bend the knee after being defeated in a war or rebellion.

Perhaps some people see rebellion in kneeling in the face of power.  If so, they are mistaken.