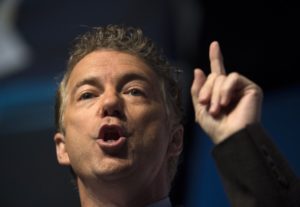 Last Month, U.S. Senator Rand Paul stood before the senate, rejecting the Republican’s proposed 10-year budget. His reasoning: The budget would send this country $9.7 trillion further into debt. We might be new to the political content game, but sending this country further into debt doesn’t seem like it’s in line with traditional Conservative values. While the Republicans have continued to focus on repealing Obamacare, they’ve taken their eyes off the debt, which is ultimately a greater threat to this country.

Understand, this opposition didn’t come from some a Democratic Senator, hailing from the Northeast Seaboard. It came from a Republican Senator out of Kentucky, who has consistently been critical of this country’s spending. Are we seeing the death of conservative economic values? [/one-half]

What do our fearless editors have to say?