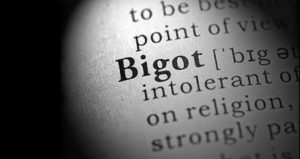 When is the last time you heard someone use the term “bigot?”

Defined as “a person who is obstinately or intolerantly devoted to his or her own opinions and prejudices,” you would think that in today’s hostile social environment, people would be hurling the “bigot” title at each other like mashed potatoes in a food fight. But strangely, they don’t. Nobody is just a “bigot” anymore, because anybody who displays prejudice against anything or anyone is now labeled a “racist.”  It is a misuse of the term.

“Racist” is defined as “a person who shows or feels discrimination or prejudice against people of other races, or who believes that a particular race is superior to another.”  Unfortunately, these days “race” is used to describe any arbitrary grouping, at the discretion of anyone with an axe to grind.  After creating a new “race,” anybody who disparages your arbitrary group can legitimately be labeled “racist.” 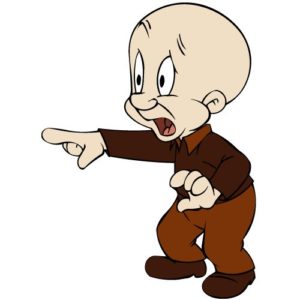 Calling a person a racist has lost a lot of its delicious invective bite, having been effectively killed by unrestrained liberal hyperbole.  Pretty soon they will need to create a whole new term to really insult someone.

On the brighter side, “bigotry” now appears to be officially dead in America.  It’s about time.