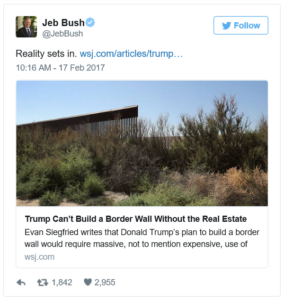 First off, I cannot express how happy I am that we’ve come to this point in American politics. Not only can the President address us online daily, but government officials can now have public sparring matches with one another in 140 characters or less. Reading a little back and forward is always exciting, but I love Jeb throwing shade with only 3 words. Interestingly enough, those words and the supporting article, shed some serious light on the situation. According to The Hill, Trump will have to seize private land along the U.S./Mexican Border to build his wall. So, let me get this straight. Trump threw out numbers ranging from $4 Billion (“If you know what you’re doing”) to $12 Billion over the course of his campaign, and that didn’t even include the purchasing of private land. This isn’t some 20-acre plot along the Southern Border. These privately-owned properties span over a distance of nearly 2000 miles. This doesn’t only show that Trump’s multiple estimates came out of thin air, but it shows that he completely ignored a major factor in the construction project. One you’d assume a Real Estate developer would think about. More interesting than his grievously wrong cost estimate, is the subject of Eminent Domain. Despite backing Trump’s Wall, Republicans are known to frequently oppose government seizure of private property. So, Trump has lied to his Republican supporters about the cost and must betray a heavily enforced Republican stance to build the wall. Top it all off with Republican officials throwing shade at him on Twitter, it doesn’t seem like “The Donald” can’t buy a win. Weren’t we supposed to be winning so much that we were going to get tired of winning? That didn’t last long.