The Dow Jones Industrial Average squeaked to a seventh straight record high on Friday, and the S&P 500 and Nasdaq also closed at all-time highs. 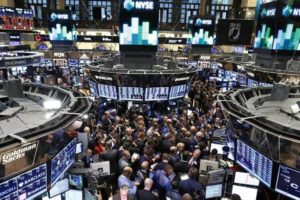 After suffering losses for most of the Friday session, the Dow and S&P 500 turned positive in the final minutes of the week.  Stock values, fueled by the “Trump Rally,” have surged since the November presidential election, gaining over 10% in value.  It has been  a remarkable run that has more than a few investors scared that the bubble may burst any minute.
Lindsey Bell, an investment strategist at CFRA Research, is quoted as saying “What makes me nervous is that it feels like the market is ignoring what could come on immigration, trade, healthcare – the negative implications that could come from a protectionist government.”
Mr. Bell’s skepticism toward this positive financial news is a vestige of the consistent pessimism that has infused the American economic mindset these past years.
Wouldn’t it be nice if we could just enjoy a good steak dinner every now and then without worrying about clogged arteries?