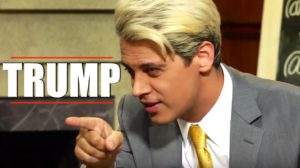 Milo Yiannopoulos is a walking stream of contradictions and possibly one of the most interesting people on the internet today. The Senior Editor for Breitbart News stands at the forefront of the Alt-Right movement, whose supporters share his ultra-conservative stance, but disparage his lifestyle as a homosexual. Makes sense, right? You’d think it’d be difficult to figure out how an outwardly gay British man became one of the most well-known personalities in Conservative American media, but it’s actually not that hard. Milo is a boastful provocateur, who consistently pushes out heavily controversial opinions, rattling Liberals to the core. He’s brilliant in the sense that he has members of the Left literally eating out of his hand. Everything he says gains immediate traction, pushing liberals into yet another media frenzy, further contributing to his fame.