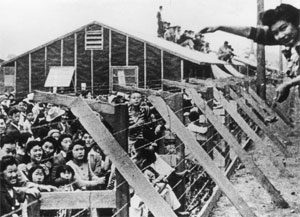 Japanese – Americans in the Camp

The Los Angeles Times did a piece today on the 75th anniversary of the executive order that led to Japanese-American citizens being interned by our own government during World War II. The Times article draws a parallel between Democrat President Roosevelt putting American citizens in barbed-wire enclosed detention camps, and Republican President Trump making citizens from seven dysfunctional Islamic countries wait an extra 90 days before getting vetted to travel into the U.S.

Tokuji Yoshihashi, a 94 year-old American veteran of the camps, and of military service with the highly decorated U.S. Army “Nisei” battalion in the European Theater of Operations, was interviewed. He was quoted as saying “That order to ban all the Muslims … I don’t think that’s right.”

Later in the article, former Democrat U.S. Rep. Norman Mineta is quoted “……we have a particular moral obligation to remind people that measures like the Muslim ban are not just unconstitutional, they are un-American.”

The MUSLIM BAN? What MUSLIM BAN?  The Times continues to facilitate the myth that the executive order is a “Muslim ban,” rather than truthfully and accurately explain that it was a 90 day moratorium on travel to the U.S., inapplicable to over 1.26 billion of the world’s Muslims.

The Times downplays the fact that a Democrat put thousands of American citizens behind the barbed wire in American prison camps, without due process. Then they take a disingenuous shot at Donald Trump.