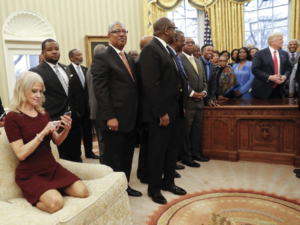 Just when you thought America couldn’t sink any lower, Kelly Anne Conway decided to sit on a couch and use her phone, while officials from historic black universities met in the oval office. Was she Facebooking ex-boyfriends from college? Maybe! Was she trying to find a hot senator on Tinder? Quite possibly! Was she ordering Trump’s afternoon cheeseburger on Uber Eats? I wouldn’t doubt it! The only thing we do know, is that the Liberal media quickly reported this “atrocity.” Yes, innocent families are dying from aerial strikes in Syria. Of course, Jeff Sessions neglected to mention his meetings with a Russian diplomat during his confirmation hearings. Yeah, there were 55 Major Human Rights violations reported within the first week of the Geneva Talks. But none of that matters, people. Kelly Anne’s feet being on the couch is a top priority that we should all focus on. Are you kidding me?

As a Democrat, I think we need to come back down to earth. Growing up, I was always told to pick my battles. By doing that, I could focus on more important issues and disregard minor B.S.. Instead of talking about actual problems, we’re harping on Kelly Anne’s feet being on the sofa? That’s like being pissed off at your buddy, Dave, for always putting his damn feet on the coffee table, and that problem becoming a story on a nationally televised news network. But hey, maybe I don’t want your bunions anywhere near the trail mix, David (#getdavesfeetofthetable2017). I think we can all acknowledge that it wasn’t the best move on her part, but she was just trying to snap a photo. Not to quote Trump, but now there were even some “So-called” journalists trying to somehow create a racial issue out of it. Sorry, but your credentials as a journalist should be revoked when you stop reporting the news and start squabbling over household etiquette. 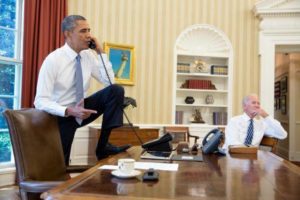 If journalists want to earn their credibility back, then they need to stop reporting things that aren’t news. If you want to call out the Trump administration for lying to the American people, that’s fine. If you want to criticize Trump for his policies, go ahead. If you want to hold him accountable for what he says as our president, then do it.   But quit succumbing to the pissing contest that the Trump administration started. Based on some “alleged tapes” involving our beloved president and some Russian prostitutes, we can’t win that fight literally or figuratively.

When it comes to Kelly Anne herself, give the lady a break.  She may as well be featured on Dirty Jobs with Mike Rowe for having to answer for Trump’s actions 24/7.