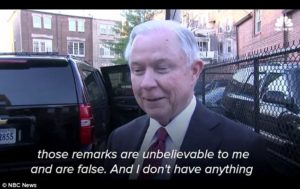 “I was wearing my Senate hat at that time”

One of the pitfalls of selecting cabinet members who have a history of accomplishment during their careers is that nominees may have often found themselves performing two or more inapposite jobs at the same time.  This can be problematic when those roles required differing rules of conduct.

During the contentious confirmation hearings for Senator Jeff Sessions, who was selected to be (and now is) the Attorney General, Democrats asked the Senator if he had been involved with contacts between Trump’s campaign and Russian officials. The Senator, under oath, replied “no.” It has been revealed that he actually did speak to the Russian Ambassador last year, during the campaign, when he was a senator serving on the Senate Armed Services Committee.

The issue is whether or not Sessions was acting as a senator in his official capacity, or as a campaign adviser for Trump, when he spoke with the Russian. Sessions said this morning that while he twice met with Russia’s ambassador during the presidential campaign season, he was speaking with him in his capacity as a senator, not as a campaign adviser to Donald Trump. It is a crucial distinction, the proof of which may determine the career of Mr. Sessions. The White House is vigorously defending the AG.

Predictably, Democrats are accusing Sessions of committing perjury, and are calling for him to either resign, or to be summarily executed in the public square. 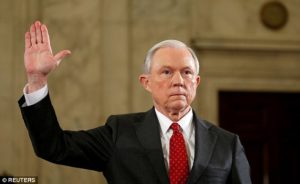 This mess could probably have been avoided, or at least defused, if Session would have simply answered “Yes, I did speak with the Ambassador, but in my capacity as a senator.” But of course, he didn’t say that. It is admittedly eyebrow-raising that he seemed to have given a Clintonesque “it depends on what ‘is’, is” answer, rather than being more forthright. Further inquiry is appropriate.

The White House should support getting someone neutral (if that’s possible) to get to the bottom of this. If there is nothing there, then move on. But if there is any subterfuge, Sessions has to go.

Republicans need to wise up and figure out that the Democrats will turn over the tiniest of pebbles looking for dirt, and if there is any dirt to find, they will find it. This recurrent Russian-connection thing may be just smoke, but until Mr. Trump can prove that there isn’t a fire behind it, he can’t move forward.