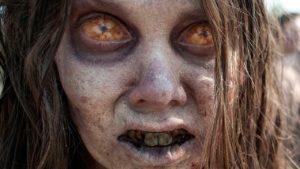 Zombie movies are terrifying. Tens or hundreds or thousands of the rotting undead, staggering toward the last surviving members of the human race in a quest to feast on their brains. The advantage for the defending humans is that zombies move at walking speed most of the time, and you can kill a zombie with a bullet to the head. (I never understood how you could kill something that is already dead, but I digress….)

The scariest thing about zombies is that there is just so darn many of them. Shoot one, behead another, blow some up, incinerate an entire crowd of them, and they keep coming and coming and coming. They don’t stop, and they won’t stop until either the last one has been dispatched back into permanent deadness, or they manage to eat all the brains of every last living human survivor.

We are witnessing a real-life political zombie experience these days. The embattled survivors are the Trump administration and their supporters, (“Conservivors”), and the zombies are the unrelenting brainless Democrats (“Demzombies“) who have no goal other than to destroy those deplorable Trumpish humans. It isn’t safe for Conservivors to step into any public spotlight, because brain-deprived Demzombies mill around outside every doorway in mindless groups, hoping to separate occasional errant Conservivors from the herd, and to cull them one-by-one. 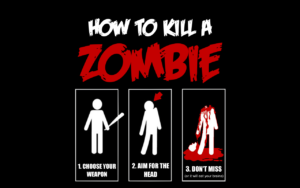 Embattled Conservivors have realized that it is not particularly difficult to eradicate attacking Demzombies, because they move slowly, are not very bright, and every one of them behaves in exactly the same way. But the Conservivors have to stick together and be vigilant, and because they only have so many bullets in their bag of political capital, make sure that every single shot they fire finds its mark.

The real problem for Conservivors isn’t that Demzombies can’t be defeated (again), but that there are many tens of thousands of them, wielding burning-hot microphones, attacking with cutting hashtags, stabbing accusations, and eviscerating tweets – and they are coming for the Conservivors from every direction, every day, all the time.  Demzombies are always on a quest to pick the brains of Conservivors.

This one is turning out to be a real neck-biter nail-biter.