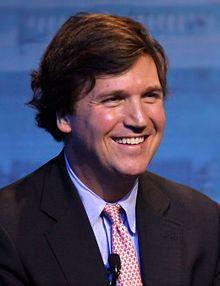 Tucker Carlson is hard to figure. His primetime Fox News program, in the slot following O’Reilly, garners a huge audience to watch his witty and genuinely amiable interviews. Two aspects of the show are fairly unique in the modern world of news sound bites and 30 second hit-and-run spots.

The first is that Tucker actually spends some time with his guests, and probes them with intelligent and thought-provoking questions. He is always well-prepared, with his facts ready and his pre-interview research complete.  And when his interviews are over, the audience knows the truth about the guest. Nobody walks out of a session with Tucker Carlson with their mask still on.

The second is that Carlson is just too darn nice. He frequently allows people to run on and on, totally evade questions, and monopolize the conversation with their agenda of talking points. It is infuriating to watch as liberal hacks refuse to defend their positions, babble into topics unrelated to the point of the interview, and Tucker politely (but firmly) tries to steer the discussion back on track. Carlson suffers fools with as much dignity as he can muster, and to his credit he never loses his cool. His tool of choice is his laugh, which he uses effectively as either a handshake to welcome friends, or as a karate chop to the throat of the clowns who venture onto the program to do verbal battle with him.

Just once, it would be nice to see Tucker cut someone’s mike, or tell them to shut up, or reach across the desk and slap the crap out of them. Maybe have a sheep’s crook come from off camera and yank them out of their chair. Or a bucket of slime dump on them from above. Something – anything. Please?

Of course, if he did things like that, he wouldn’t be the affable Tucker Carlson.

But I’ll bet that there are some times when he just wants to go home after the show and kick the cat.