Dr. David Dao received a world of sympathy after a video surfaced of him being dragged off an overbooked United Airlines flight yesterday. There was an insane amount of public outcry over social media, scolding the company for their use of violent force. Some called for a boycott of the airline, while others attacked the authorities onboard for forcibly removing the man. Either way, it appeared that everyone was on the side of Dr. David Dao.

Today people have a different view of the man they pitied, after news emerged that he was found guilty of soliciting sexual offenses in exchange for medical treatment several years ago. These criminal charges resulted in sanctions being placed on Dr. Dao’s ability to practice medicine in the state of Kentucky. I loved this at first, because the internet is almost always too quick to judge the character of so-called “victims”. However, I grew disappointed that readers would think I formed my opinion based on Dr. Dao’s past transgressions and not the events that happened on the plane. Well, I don’t really care what anyone thinks at this point, so let’s look at the situation in further depth.

Unlike a majority of the world, I never felt an ounce of sympathy for this man. To be honest, I think that he’s pathetic excuse for a human being. As a result, I sided with United and here’s why:

1. United is within their rights to forcibly remove anyone they want to from a flight (along with any other airline). Now don’t get me wrong. It’s extremely inconvenient that they overbooked the flight and passengers were randomly selected to be removed. Trust me, if I were the guy getting stuck at the airport, waiting on my next flight home, I would be totally pissed off too. But that doesn’t change that the airline was well within their rights to remove Dr. Dao. If it were me, based on my usual brushes with authority, I would’ve reluctantly gotten up, threw out some passive aggressive comments to the assholes escorting me off and collected the cash United offered in the first place. Why stop there? I’d probably try to milk out some extra miles too. It’s a crappy situation, but I’d just have to deal with it.

2. Dr. Dao sitting on the plane and refusing to leave until he’s dragged off like a sack of potatoes is why I hate humanity. Going limp and saying that you want to die? Come on, buddy. Where’s your self-respect? Where’s your manhood? Getting up and leaving the flight was an option until this guy threw a tantrum. The world has reached a level of childish entitlement that allows people to believe that they aren’t accountable for their actions as adults. Children have the option of screaming and crying until they get what they want. Unfortunately, adults aren’t allowed that luxury and are often forced to compromise. It’s a huge inconvenience most of the time, but acting responsibly usually doesn’t result in a busted lip.

3. The viral video turned into a stream of racist allegations towards United. I fail to see how randomly selecting anyone on a flight and asking them to leave is an issue of race. We live in a land of immigrants and people of all races are going to be subjected to the law. This man wasn’t harmed because he’s Asian. He was harmed because he refused to comply with police and learned that he should have taken the easy way out. 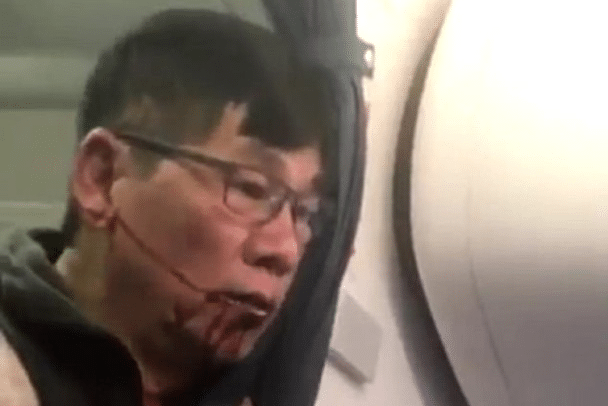 The internet needs to stop victimizing people who don’t deserve to be victimized. This guy sat at a fork in the road and decided to take the bumpy path. As a result, people have seen Dr. Dao at his lowest of lows and learned about his past transgressions. If he just sucked it up like a majority us would have, he wouldn’t be the world’s newest internet meme. Either way, I’m sure United will end up settling even if Dr. Dao doesn’t deserve a penny.

Nobody is without fault on this one.  United Airlines stock took a hit on the Dow, and Dao took a hit on United.  ‘Sounds fair to me.