Donald Trump appeared on “Face the Nation” with John Dickerson on Sunday and abruptly left after being asked a question about his wiretap allegations. I’d like to say that his decision to end the interview was surprising, but our President’s skin is about as thick as rice paper. Trump consistently shies away from difficult questions, mostly due to the fact that he’s incapable of providing an answer that borders along the notion of truth. He’ll usually throw out the same Trumpian jargon that we’re used to, citing opinion and alternative facts, or he’ll simply avoid a question altogether. To him, his inability to answer any sort of inquiry is a shot at his ego, which is something that our megalomaniac President can’t handle. It’s apparent that Trump’s temper is, and always has been, an issue.

The same can’t be said about John Dickerson, who was initially insulted by Trump after he referred to his show as “Deface the Nation.” Trump supporters, as they usually do, have written off his comments as an attempt at humor; however, humor isn’t usually present when one man questions another’s professional integrity in a serious setting. You’d think that Trump would at least have an ounce of social grace (considering he’s the best businessman that the world has ever seen), but etiquette really isn’t his strong suit.

Dickerson handled the situation with dignity, journalistic integrity, and ultimately did his job. His role as a journalist is to ask the difficult questions and push people to provide an answer. Our President’s inability to answer those questions shows that he’s not qualified for the job. Some may believe that the line of questioning is unfair; however, blindly making an assertion that President Obama wiretapped Trump Tower is so moronic that it warrants inquiry. President Trump may not be able to answer the difficult questions, but he at least should be able to provide some note of reasoning for the words coming out of his own mouth.

Pundits on the left have been ripping Trump, but none did it better than Stephen Colbert. The Late Night host defended his colleague and took shots at Trump like no one else could. Not only were his comments hilarious, but they were perfectly crass. He called out Trump in the only way that true Trump supporters can understand: bullying the bully. There was a level of fearlessness behind it, but it wasn’t devoid of wit. If you’re wondering why Colbert’s comments vary from Trumps usual antics, it’s because he isn’t the President of the United States. As a comedian, he isn’t held to the same standard as the leader of the free world; and thus, is permitted to voice his opinion in any way he sees fit. If want to see Colbert’s takedown, click on the link…    Colbert on Trump

Pops’ take on this:

Southpaw can’t seem to make a point without being insulting and demeaning, which is unfortunately typical of snowflake millennials these days.  It is sad that every “discussion” must begin with personal attacks, rather than with calm analysis.  (But I suppose it isn’t easy to be objective when you get all of your news from The Daily Show.)  And something else, the interview didn’t take place on the set of Face the Nation, it was in the White House.  It is incredibly bad form for a reporter to badger a President in the Oval Office, and shows a level of disrespect for the honor of being invited to enter in the first place.  You don’t go into someone else’s home to give them a hard time – ever.

That being said, yeah, President Trump is a terrible communicator.  And yeah, he says things in a knee-jerk fashion that are frequently dumb, always hard to follow, and sometimes absolutely wrong.  His effect is scarily reminiscent of Dustin Hoffman in Rain Man.  Our President is always off-script, very unlike most politicians, who don’t speak without a teleprompter or cue cards, and when they do speak, they don’t say anything.

But is the President incapable of telling the truth?  No.  Is he lacking even “an ounce of social grace”? No.  Southpaw can’t seem to control his own hyperbole.  What a shame.

And don’t even get me started on Colbert.  That clown wannabe.  Will Rogers, he ain’t. 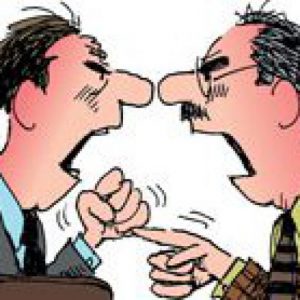 On a side point, if you watch the White House interview, you can see the “Squat and Squabble” premise in action.  Two people, standing face to face, in strong disagreement.  The conflict elevates – it’s human nature for it to happen.  As we say here at S&S, the only way to have a meaningful dialogue is when people are comfortably seated, without the confrontational physical posturing.