History is replete with famous individuals whose behavior has been driven by paranoia, and many works of fiction have featured main characters destroyed by uncontrollable suspicion of everyone and everything.

The paranoia of Josef Stalin, Saddam Hussein, and Richard M. Nixon rendered them distrustful of everyone to a point of dysfunction.  Lead fictional characters as portrayed in The Caine Mutiny and Conspiracy Theory demonstrated the life-changing damage caused by undue suspicion.

Paranoid Personality Disorder (PPD) is a mental disorder characterized by paranoia and a pervasive, long-standing suspiciousness and generalized mistrust of others. 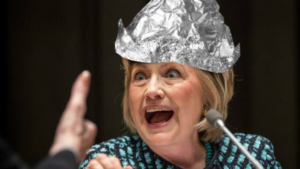 The latest claims from Hillary Clinton, the decades-long proponent of the “vast right wing conspiracy,” indicates that she may finally have slipped over the edge from being reasonably suspicious about her adversaries to being a full-on paranoid.  In the political sense, her final break from reality may be more accurately identified as “CLINTONOIA.”

At a recent TV appearance, Hillary blamed her election loss on the following groups/people/things:

Won’t they please just come and take her away?