Life, liberty and the pursuit of happiness. It’s one of the most well-known phrases from the Declaration of Independence, but it also serves as a platform for the American dream. These basic principles inspire people to come to this country in order to improve their quality of life. While some people come to this place to escape some sort of persecution, many simply want to improve their condition. However, though I understand the concept of the American Dream from a practical view, the philosophical notion of such a thing seems somewhat contradictory. You see, happiness stems from contentment. Contentment simply rests upon the notion that people are “fine” with the way things are around them. If this is true, then one would have to first seek being content with their quality of life before being happy. Thus, our sense of discontent leads to contentment. It’s a strange concept, but it isn’t farfetched by any means.

If someone seeks to make a positive change, they must first identify a given problem and experience feelings of discontent. So, many act in a manner to achieve a desired state. While some succeed, others completely fail. Interestingly enough, attempting to reach this state may result in further discontent. If we are to look further, it is built within the human condition that we must achieve more than being merely content; thus, we become upset with what we have earned thus far and seek to improve our conditions even further. That is the Pursuit of Happiness to its very core. Seeking something higher than one’s current status, no matter what someone’s current status may be. 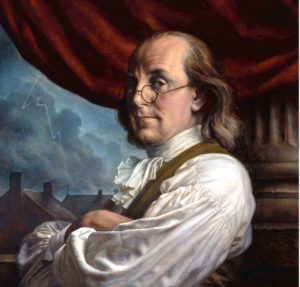 “The Constitution only guarantees the American people the right to pursue happiness. You have to catch it yourself.” Benjamin Franklin

So, our discontent pushes us further into that pursuit, to which we set another bench mark. However, once that bench mark is met, we seek to reach yet another bench mark and yet another after that. No matter what. No matter how hard we try to pursue happiness, we continuously fall into that same feeling of discontent. It’s interesting that the Pursuit of Happiness can turn into a Pursuit of Perfection, and within that Pursuit of Perfection, we do not only abolish the notion of contentment, but sink into discontent and eventually sadness. Our inability to consistently obtain something more, to truly reach the pinnacle of happiness, often makes us miserable.

American Politics mirror American life. No matter how often actions are taken to improve the lives of Americans, we still find a way to be critical of those actions. It could simply be due to discontent with a given political party, or it could be resulting from us discrediting any given accomplishment to “not being enough”. However, just as in life, our inability to reach the desired level of perfection creates discontent amongst the American people. That discontent insights a sense of misery, which eventually stems into the chaos we are witnessing today. Now, some may critique my argument saying that contentment will never insight positive change, but that is not my intention. Ultimately, we must continue the Pursuit of Happiness while not losing our current sense of contentment, for when we do, the pressure of failure detracts from our ultimate goal. As Americans, as human beings, we should be able to recognize the things we are content with while simultaneously pursuing happiness. If we neglect to do so, it only appears that our quality of life will continue to suffer with the passage of time.

(And don’t let anyone else tell you what may or may not be changeable.)