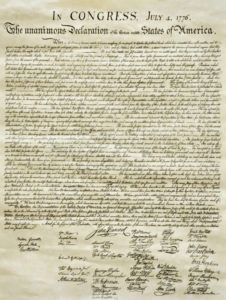 It changed the world forever

IN CONGRESS, JULY 4, 1776
The unanimous Declaration of the thirteen united States of America

“When in the Course of human events it becomes necessary for one people to dissolve the political bands which have connected them with another and to assume among the powers of the earth, the separate and equal station to which the Laws of Nature and of Nature’s God entitle them, a decent respect to the opinions of mankind requires that they should declare the causes which impel them to the separation……..”

Our Revolutionary War ended in 1785, and of the total 2.5 million people who lived in the thirteen colonies when the war started, approximately 33,000 had been killed, wounded or imprisoned by the British. (At that same ratio, it would represent over 4 million Americans out of our current population!)

In 1787, upon exiting the Constitutional Convention, Benjamin Franklin was approached by a group of citizens asking what sort of government the delegates had created. His answer was: “A republic, if you can keep it.”

It has been 241 years since we threw off the mantle of political oppression.

May God bless these United States of America.