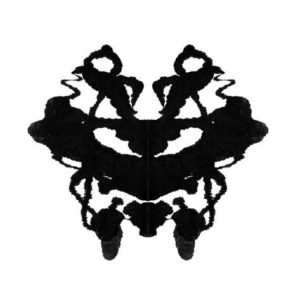 The Rorschach Inkblot Test is a projective psychological test consisting of 10 inkblots printed on cards (five in black and white, five in color) created in 1921 with the publication of Psychodiagnostik by Hermann Rorschach.

Over the decades, the validity of using the test for the measurement of emotional functioning and thought disorders has been criticized, but the premise of the test remains undisputed: Even when looking at the same identical thing, different people have remarkedly different interpretations.

Remember those summer days lying in the yard with your friends and looking up at the clouds? Where one person sees a ship, one may see an animal, another one sees a castle. Each mind constructs the same image differently, and each observer sees what the mind tells it to see.

The same thing happens in the media. Where one observer sees a meeting, another sees a conspiracy plot. One may see an endorsement of western civilization, another sees a validation of white supremacy. A single word can mean many things to different people, and a person’s interpretation is largely affected by their predisposition to see what they expect to see.

And this is the crux of the problem in the media these days. Rather than have someone show us the ink blot, and let us figure out what it represents to ourselves, the media is telling us what the ink blot represents to them. It is a battle between fact and bias, and unfortunately the media consistently presents us with much more bias than fact.

The publication of Donald Trump Jr.’s email exchange concerning the meeting with a lawyer from Russia is a great example of the media’s Rorschach treatment of fact. While the plain text of the emails is there for all to see, some pundits see treasonous collusion, others can’t see any “there” there.

It would be refreshing if the media would just show us something, and stop telling us what we are seeing. Let us believe our own “lying eyes” rather than what you think it is.

As an aside, does anyone really think that the U.S. government never had a preference for a particular candidate in a foreign election?