Many people seem convinced that major changes are occurring in the world today regarding global warming/climate change, and that those changes are caused by human activity. The proponents of this theory condemn the burning of fossil fuels and the release of high quantities of “Greenhouse” gases by humans, and direct enormous effort at curbing this activity. 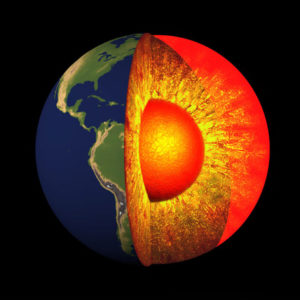 The hot is on the INSIDE, not on the outside

But a look at the logic of that argument reveals serious flaws. They are saying that changes in the atmosphere are what is warming the planet, asserting that it is a thin blue line of atmosphere, about 60 miles thick (according to NASA), causing the warming of the entire planet (which is 8000 miles in diameter).

Think about that for a second. They say that a thin coating of gases surrounding a planet is causing it to heat up. Really?

The core of the Earth is a solid ball, mostly iron, about 750 miles across. That inner core is surrounded by an outer core of molten elements that vary in temperature from 5,000 to 14,000 degrees Fahrenheit, and that molten core is about 1800 miles from the surface of the planet. From time to time, the molten core leaks out onto the surface, in forms of volcanoes that are sometimes catastrophically explosive.

Humanity lives atop the crust of a molten planet, not much different than flies crawling around on the top of a freshly baked chicken pot pie.

If the oceans are getting hotter, and the polar ice caps are melting, and the atmosphere is warming, it is far more likely that it is the heat coming from below us, and not the air above us, that is the real culprit.

Perhaps we shouldn’t be pointing fingers and looking skyward to find the source of our environmental change – maybe we should be looking down.