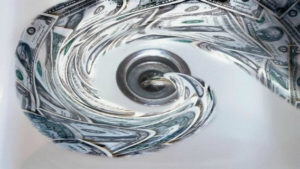 Southpaw’s take on the matter:

I have always been an admirer of Senator Rand Paul.  A fresh voice of reason, his calm and forthright presentation is always consistent, logical, and persuasive.  Why he wanted to be a politician, I’ll never know.  In pursuit of his objective of fiscal responsibility, he had to abandon his libertarian loyalty and become a Republican and try to change the party from within.  Senator Paul hasn’t yet been successful, but he is out there in the trenches, slugging it out every day.

Rand Paul’s stances on Fiscal Conservatism and Economic Reform have been two of his main staples as a Senator and former Presidential Candidate. He isn’t afraid to question his own party, which is something to be respected in any politician. However, despite developing propositions to balance the budget, and lessen this nation’s debt, he’s consistently met with resistance from his own party. Senator Paul has sought out Social Security Reform, Military Budget Reform, Healthcare Reform and proposed a complete audit on all federal spending. If his obvious intent is to eliminate wasteful spending and balance the budget, then why are Republicans consistently pushing back?

It appears that “Conservative Economic Values” aren’t conservative at all. If anything, Republicans have supported spending down avenues that pertain to their party’s interest, but remain unconcerned with the overall budget. They can justify your taxes being invested into further military spending, but don’t support the notion of providing universal healthcare to American citizens. Either way, proposing an alternative system capable of pushing this country further into debt seems counterintuitive.

However, you can’t completely knock the Republicans, because it seems that they’re trying. The issue: They’re constantly debating to which degree Obamacare should be repealed, while remaining incapable of coming up with an alternative plan of action that won’t send us further into debt. Today, Senator Paul walked out of a meeting held to discuss Republican proposed healthcare alternatives with White House Staff members. Between the nation’s debt and revised healthcare, it doesn’t seem that the Republicans can agree on anything at the moment.

Rand Paul has continued to hold his Conservative Flag high, developing strategies that are meant to balance the budget and eliminate debt. It’s difficult to understand the pushback he’s receiving from the Republicans, if their party still holds true to the conservative virtues they’ve lauded over the years. Otherwise, it seems that fiscal conservatism is no longer a priority to the Republicans, and that Trump’s Presidency is simply a guise for Rightwing reform.

Pops looks at it just a little differently:

It’s sad, but as much respect as I have for Senator Rand Paul, the specter of his quirky father (Congressman Ron Paul), always lurks in the shadows.  It’s not like I am visiting the sins of the father on the son, but the old “apple falls close to the tree” maxim haunts me a little. That being said, I really like Rand Paul. He has courage, tenacity, and common sense, and he seems to be one of the few people inside the beltway who realize that runaway spending is like riding a bicycle, blindfolded, into a burning building.  He knows that it can’t end well.

Rand Paul is effectively sponsoring an intervention of spending addicts in the Republican party.  For what seems like forever, Congress has always tried to remedy things by burying problems with money – our money – and having long ago run out of our money, they are now using debt – our debt.  Feeling superior, Conservatives have always presented themselves as the champions of responsible spending.  But that is a relative term.  When you compare yourself to Democrats, anything short of drunken sailor wastefulness looks somewhat good.  It’s like when your wife comes home from shopping and brags about how much money she saved because the eyewateringly expensive shoes (that she didn’t need) were on sale.  In  budget-speak, the Congress calls it a spending reduction if the increase doesn’t turn out to be as high as they planned.  It’s crazy.

There is some change in the air.  Having businessmen running the government sideshow now, people who know that spending money without a tangible return down the road is bad capitalism, is certainly a step in the “right” (pun intended) direction. The Trumpers are explaining that they need to spend money to make money, which is better than just spending money with no end in sight, I suppose.  If it doesn’t work, and it might not, the USA will ultimately need to find out whether or not the World Court has a bankruptcy division.  Time will tell.